Alleys of whispering seafaring stories of old Swahili men, spiced by Indian fragrances , a backdrop of  chiming Hindu bells  and Muslim call for prayers characterize an Old town Sitting by the edge of the ocean at the southeast side of Mombasa island. A 72 hectares piece of rich cultural diversity priding in the coexistence between Arabs, Asians, Portuguese, British and the local Swahili people for hundreds of years silently going in and out of craftily styled and beautifully carved wooden doors of historical buildings dating back to the 18th century collectively lining out to shape confined narrow alleys and pathways below hanging electrical wires trying to connect the quiet ornate balconies strongly held by carved brackets.

The diverse economic, political, social and religious integration defining this ancient town will awe you yet still leave you mesmerized at solving the puzzle that every docking ship by the wave leaves when a Swahili man with a sea story blows your mind away.

While the stability of the buildings is slowly fading away like a dream, the colours and vibrant character of this town is a step back into time when coexistence between cultures thriving out of sea trade had to survive while creating one of the most monumental towns in history leaving behind a rich story for generations to come.

Stroll down and take a step back in time to see the;
White “Obama” House which housed the 1st American consulate and was built towards the end of 18th century by a Bohra Indian.
Old Post Office built in 1989 used by the Indians to send letters and money back to their families during the railway construction.
The Government square that housed government offices running trade businesses at the port and wealthy merchant offices in the shipping industry.
Old Port that served as the docking harbor for all ships coming in from the west now dominated by a few boats and ruins.
Mandhry Mosque dated to 1507 and with a fresh water well, which is the oldest in Kenya.

Finally just walk into a swahili hotel enjoy some coastal dish and grab some ‘Dera’ (long swahili dresses)  from a store on your way out.

Or take The Greatest walk into,

A step back into the Portuguese regime in the 16th century takes you centuries back into old military architecture, setbacks faced by Muslims, Arabs and European Christians over control of sea trade as portrayed by remnant battlements and ruined buildings across the compound and encounters of a local and foreign coastal trader. Built between 1593- 1596 by the Portuguese and designed by an Italian Giovanni reflecting the military Renaissance ideal (whose proportions and geometrical harmony are similar to that of a human body) to guard the Old port of Mombasa, the Fort proved beyond doubt, the ability of western civilization to conquer and control Indian Ocean trade routes.

This UNESCO World Heritage treasure now sits as a great statute showcasing different cultures clearly defined by the many changes done during the interchange( rated at least 9 times) of trade control between English, Swahili and Arab yet still its form, design and the coral structure has stood over centuries.

This resilient structure now houses the most visited Museum in Kenya which gives an intriguing Swahili cultural lifestyle story. It also showcases Portuguese naval graffiti, Portuguese frigate which sank off during a siege in 1968 and the Mazrui hall. The Omani house where the East African Sultan lived exhibits Omani jewelry and artifacts, audience hall and arche passage to the open water cistern. Artifacts, Ceramics, pottery still carry the dust of slave trade. There’s a Swahili cultural Centre established to train youths on Swahili craft where you can grab some Antiques and souvenirs.

To top off your tropical island experience is the Mombasa butterfly house which can turn the butterflies in your stomach alive real quick by the awe of this Old town experience and some ice cream.

Remember to also read why you need to visit Mombasa on How to explore Mombasa Kenya.

Tick the new posts notification icon at the bottom for every Monday posts.

Thank you for stopping by 🙂 🙂 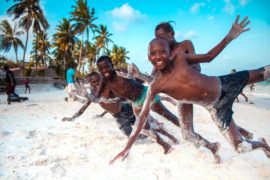